‘Veda’ means jnana, knowledge, as we all know.  It has in it all the knowledge from cosmology to psycology, from matter to energy, etc., Vedas are shabdha pradhana, ie., sound dominant than the ‘artha’ the meaning. The hymn देवीं वाचमजनयन्त देवा: तान् विश्वरूपा: पशवो वदन्ति… explains that the Gods created the daivi vaak( the divine spell) that is the ‘Omkara’ and this was spelled by all the animals on this earth! Also, the Taitthireeya Upanishad says ….. आकाशस्संभूत: आकाशाद्वायु: वायोराप: and so on which explains how life came into existence.

According to Nyaya, Tarka shastra, शब्दगुणकमाकाशं  which means element aether represents sound and so it is clear that  life came into existence from shabda tatva ! Omkara is the root or the beeja roopa of sound. It is a known fact that there exists a point at which the space-time curvature becomes infinite. And from this point the whole universe came into existence. Just like that the whole universe is believed to have come in to existence from the omkara! This is represented by the bindu in the shichakra, which can be termed as pivot point which is the mUlam(root cause) of the srusti(creation),  which is the parashakthi, the srshtikartri!

Vishwam ie., the universe is shabdha pradhanam, sound dominant. This is the truth, which is lately accepted by modern scientists.

A scientist named Hans Jenny performed experiments using sound frequencies on various materials such as water, sand, dust, liquid plastic and milk. Dr Jenny placed the material on a metal plate attached to a crystal oscillator which was controlled by a frequency generator capable of producing a wide range of vibrations.  He then filmed and photographed what happened on the plate. He coined the term Cymatics, which is derived from the Greek ‘kyma’ meaning ‘wave’, and ‘ta kymatica’ meaning ‘matters pertaining to waves’.

Dr. Jones invented the machine called tonoscope with which he was able to interface human voice to the vibrating plate directly. His observations and experiments proved that sounds, also thoughts which are the subtler forms of sound bring up a change in the environment! In the process of his observations, when ‘Om’ was chanted into a microphone, the result obtained was just the shape of Shree chakra! And this is really astonishing!

Apart from this fact the concept of srichakra has been much emphasized in the vaimanika sastra. The fact is, for the navigation of planes in olden days, different energy points were located on earth and based up on the energy radiations of these points, the navigation of vimanas was done. when all these energy points are connected in to a grid the result is three-dimensional srichakra. which is illustrated below: 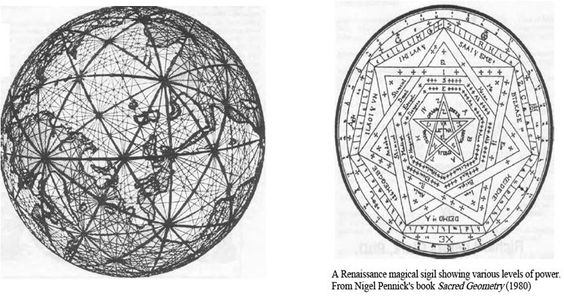 In the same manner, the earth has 7dones of energy centers. Since it is an accepted fact that ’     यत् ब्रह्माण्डे  तत् पिण्डे  which means geomancy and somamcy are the two sides of the same coin, what all exists in the universe, the same exists in the living beings! and also can be said the vice verse!

When we harmonize geo we automatically harmonize soma and vice verse. This is the exact representation of srichakra.

This fact is not simply a hype, Germans who all have an eye on our Vedas were able to realize this fact and during the World War II, the Scriptures available on these  concepts have been stolen by German spies as per the instructions of Hitler and Germans were able to manufacture anti-gravity planes which had vertical lift.

The pyramids have an important property of trapping strong pranic field inside it and the objects and organisms beneath it get tuned to this pranic field automatically! The design of the shrichakra coincides with the geometry of the Great Pyramid of Egypt, whose base angles measure 51.5032 degrees. This is called ‘phi’ or the ‘golden proportion’ which acts as a preservative for the objects inside the enclosure.

Some scholars also represent the nava avaranas of the shree yantra to the growth of the foetus in the human body for nine months in the womb of the mother!

The outer part of the shree yantra, contains a square with a gate way on each side. This square represents the human body and the eight corners here are the eight elements of the body..This part is called the bhupura, which represents the earth element.

This square has three layers where the three layers represent tamas, rajas and satva gunas – The three qualities of human beings. The base quality is tamas or the darkness or the ignorance. After passing this stage comes a stage of little bit of light or knowledge or rajas and then comes the satvic stage full of light or knowledge! So at the base level the sadhaka is supposed to cross these three stages and then start mounting the hill(meru) of enlightenment to mingle with the eternal!

After crossing these next comes the three concentric circles. The outer circle represents manah, middle one represents buddhi  and the innermost circle represents jivatman! After uplifting his mind from the stage of darkness that is tamas to the stage of light that is sattva, one has to now use his less wavering manas, now filled with light, use his buddhi to realize the soul! Once we are able to realize the soul, we are ready to experience the subtlest energies of our body and the universe!

By awakening the energy present in the 7 chakras(represented by the petals in shriyantra), one can tap the much more subtler forms of energies like the eight siddhis.

Then comes the triangles where the three vertexes represent jnana shakti, kriya shakti, and ichchashakti. If one reaches a state where he makes use of all these, there is no doubt of becoming one with the eternal!

And finally one reaches the bindu which is the prAnashakti which is holding the whole universe and become one with it!

Note: Long back this I published in my previous blog 10 years back in Bharateeya Sandesh. It was hacked.

Any suggestion or information, which may help in the improvement of this artilce is welcome

its better if some conclusion is written so that aim of the article can be located by people very easily..

Namaste. Needless to mention that no scientific gadget is capable of reaching that which cannot be reached by the living instruments of Life. YatO vAchO nivartante aprApya ManasA sah. The domain of AdhyAtmam and Adhi Daivam are covered by this Upanishadic statement. This being the case, to claim that Om chanting generated/made manifest Shree Yantra can be taken only with a bag of salt. The truth about this “tonoscope” and the Yantra is exposed in the website – To another scientist I sent the same link and I did not get a satisfactory answer so far.[But please take a look… Read more »

Thanks Ramakrishna Sharma ji for ur comment.. @Mukeshji sure we will! This blog is aimed at bringing back the lost glory of India in all possible ways! this blog is trying to include all possible information about this nation! We need the support and help of every true Indian to reach our goals! Thanks once again to all those who support and help us. Also my sincere thanks to those who comment, coz they are the real readers seeking knowledge!